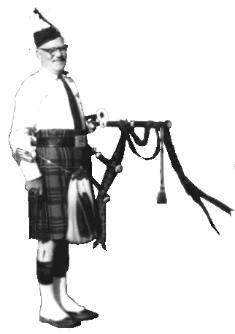 The year was 1865 when Virginia City first celebrated the birthday of
Scotland’s Poet Laureate, Robert Burns. These early Celtic immigrants to our state could never have known that 95 years later another immigrant from Scotland, John “Scotty” Sneddon, would walk into the Reno Police Department with the idea of starting a Police Pipe Band.

Sneddon had served with the Gordon Highlanders during World War I (the youngest pipe major in the British army at that time), and soon after, became Pipe Major of the 1st Highland Light Infantry.

Only two police officers, Richard James and Calvin Lovegrove answered Scotty’s call. So, he decided to open the band to civilians. James’ wife, Wilma, suggested “Sierra Highlanders” as a
name for the new band.

In 1961 the band officially formed and became incorporated. The founding members included future Pipe Major, teacher, and most enduring piper, Dr. James F. Flanagan, Junior. It was under Flanagan’s leadership that the Sierra Highlanders expanded their membership and performances. They played in parades throughout the Reno area, and diverse venues such as San Francisco’s St. Patrick’s Day parade, and county fairs in Flanagan’s hometown of Quincy, California. The Sierra Highlanders became a fixture of Carson City’s Nevada Day Parade each year. Fans would travel great distances to see the band play.

Dr. Flanagan was also the band’s most prolific teacher, skillfully passing on the skills he had learned from Scotty. Through his 36 years as a Sierra Highlander, whenever band membership waned, he was always ready to step up once again as its leader. Jim passed away in 1997…he is sorely missed. 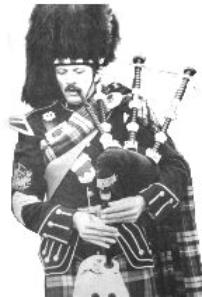 During one of the band’s greatest growth periods one of Flanagan’s students, David Brown, rose to the top and accepted the responsibilities as Pipe Major. Dave’s natural talent and flair for the dramatic inspired the band to greatly expand its repertoire and perform in more concert situations. Pipe Major Brown also led the Sierra Highlanders into their first pipe band competitions. The earliest was in 1976 at a Scottish Games in Phoenix to commemorate the passing of Pipe Major John Sneddon, who had also formed a band in the Phoenix area. It was a small games (only two bands) but it piqued the band’s appetite for competition. The Sierra Highlanders then went to the San Francisco Caledonian Club’s games in Santa Rosa. They finished well for their first major competition, only hundredths of a point out of a medal.

Pipe Major James Laughton took leadership of the band during the 1980’s. This period saw the band grow into a major competitive Grade IV band. The Sierra Highlanders had always felt isolated from the rest of the pipe band world which was centered mainly on the coast. Jim brought in several instructors from higher grade bands to help improve the band’s sound and enable them to compete at a comparable level. However, as the Sierra Highlanders became more competitive, other bands were also improving. Even so, the Sierra Highlanders soon became the band to beat in such major games as Santa Rosa, Monterey, and Costa Mesa.

PM Burch Palmer as the band leaves the field
following Massed Bands at the World Championships in
Glasgow, Scotland. –
August 2005

The current Pipe Major, Burch Palmer, came to the Sierra Highlanders from Montana where he served as Pipe Major of the Miles City Caledonian Pipe Band. He brings with him a diverse musical background that is returning the band to its roots. Many competition pipe bands focus so intently on their competitions, that their repertoires and public performances begin to suffer. Burch has recognized this deficiency and has redirected the band’s efforts. The repertoire has been expanded and new piping and drumming students are being trained. The Sierra Highlanders Pipe Band from Reno, Nevada celebrates its 45th anniversary this year. The Sierra Highlanders perform at many state and community events, including the Nevada Day Parade and the Governor’s Mansion in Carson City, The Nevada State Fire Fighters Memorial Ceremony, the Veterans Day Parades in Reno and Virginia City, and many other public and private events throughout Nevada and Northern California.
The Sierra Highlanders have worn the multi-colored tartan of the proud Buchanans since Scotty formed the band in 1961. With some of our kilts wearing thin again, the band has voted to switch to the MacKay tartan, in honor of John Mackay. John Mackay was an early Nevada settler and miner in the Comstock Lode (during the 1870’s), where he made his fortune. He spent much of his wealth helping those in need and developed a reputation as a great philanthropist. The Mackay School of Mining and Mackay Stadium at UNR are also named for him.

We will miss the old
“Technicolor” tartan, but all things must change eventually.